Probably the only Theosophist to meet Hitler

some difficult questions for Theosophists

George Lansbury (1859 – 1940) was a long serving Liberal and then Labour MP who was an uncompromising pacifist who shared Annie Besant’s concerns for social justice. He joined the Theosophical Society in 1914 after coming into contact with the leadership and attending lectures. Prior to his membership of the Society, he was a Christian Socialist and remained a devout Christian until his death in 1940 he was well known for his Christian Pacifist views but not generally as a Theosophist and it was rare to see him mentioned in connection with Theosophy outside Theosophical circles. I’ve hardly met anyone, Theosophist or otherwise who has ever even heard of him.

George Lansbury opposed the first World War and founded, The Fellowship of Reconciliation, an organization to help conscientious objectors, whereas Annie Besant and later president C Jinarajadasa supported the Allies and another later President of the Society George Arundale regarded war as a factor in evolution.

He was one of the founders of the Daily Herald , a daily newspaper which was for many years, the voice of the Labour Movement. For a number of years, he was the paper’s editor.

George Lansbury’s pacifist views were always controversial, even within the labour party, but it was during the 1930’s that matters came to a head, losing him his job and leaving him burnt out and disillusioned.

During that strange period in British political history when we had a labour Prime Minister, Ramsey MacDonald, presiding over a “National” predominantly conservative government, George Lansbury was leader of the Labour opposition composed of MPs who refused to join the National Government.

The burning issue of the thirties was Fascism and what to do about it. Effectively George Lansbury’s position was that he hated Fascism but opposed the use of force against it. Although laudable, we can see with hindsight that this approach was going to run into serious trouble.

It is also sad to note that although George Lansbury was an outstanding social reformer for decades, most of the write-ups I have found for him in Encyclopedias and Gazetteers refer to his pacifism in the thirties and the difficulties it caused him. To help redress the balance, I have included a page on George Lansbury Theosophist & Social Reformer

The trouble really began in 1933

The East Fulham by-election in June 1933, just 6 months after Hitler came to power, was dominated by the issue of rearmament against Nazi Germany. George Lansbury as Labour Leader sent a message to the constituency:

I would close every recruiting station, disband the Army and disarm the Air Force. I would abolish the whole dreadful equipment of war and say to the world "do your worst".

Despite this uncompromising stand, George Lansbury retained the support of much of his party and survived several attempts to oust him. He offered to resign on several occasions but lack of a credible alternative persuaded the party to keep him on.

The crunch came in 1935 when he opposed not only military action by the League of Nations but also sanctions against Mussolini’s Italy after its invasion of Abyssinia. He took the position that sanctions were war under another name. The majority of the Labour Party did support sanctions and Lansbury found his position untenable, especially after a vitriolic personal attack at the party conference by Ernest Bevin. He resigned despite a vote of confidence in his favour to be replaced by Clement Atlee.

George Lansbury remained a Labour MP until his death in 1940. Despite being 77, in 1936 & 1937, he traveled extensively meeting world leaders in an attempt to secure peace as a major war was clearly looming. He met Hitler twice and it hard to imagine what a meeting between these two men would have been like. I conclude that Hitler would have seen Lansbury’s pacifism as indicative of a weakness in the British establishment which he could exploit. It is, however, now very easy to see in the light of history that Hitler could clearly not be dealt with on a reasonable basis.

The Grand Tour of National Leaders quite frankly failed and George Lansbury was disillusioned and exhausted at the end of it. 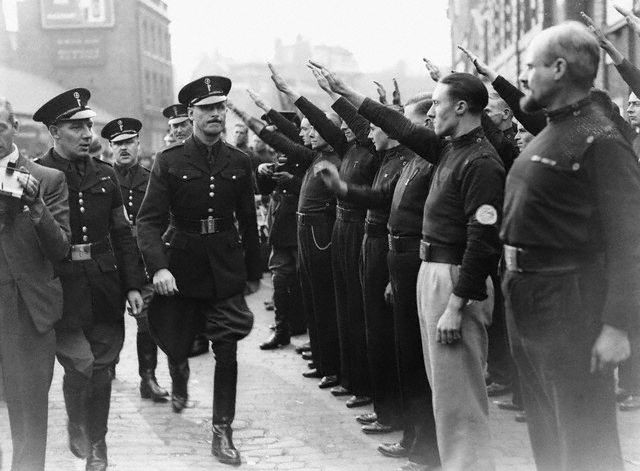 saluted by his Blackshirt supporters.

mainly against Jews incited by his anti-Semitic speeches.

Although Mosley’s Blackshirts posed more of a threat to law and order than a challenge to British Democracy, there was some concern about the ability of the establishment to deal with them at the time and it was not until after the Cable Street Riot of Sunday October 4th 1936 that the Government passed the 1936 Public Order Act, which banned Fascist uniforms (but not the salute) and regulated their marches.

George Lansbury’s reaction to the march that led to the Cable Street Riot caused him a serious loss of credibility and relegated him to an irrelevant figure with the general British public. Against the scenario that Mosley’s British of Fascists, (Blackshirts), who had a reputation for extreme violence against Jews, were proposing to march through Jewish areas of the of , many political leaders wanted the march banned. With the local population threatened by the prospect of uniformed Fascists marching down their streets, Lansbury first asked for the march to be re-routed and when that was turned down he told East Enders:- “I advise those people who are opposed to Fascism to keep away from the demonstration”.

This “ignore them and they’ll go away” attitude was backed up by the Daily Herald but didn’t cut it in the East End and nationally was seen as out of touch with the real situation. As it happened Mosley’s Blackshirts did more or less go away over the following years. The movement was already in decline by 1936 from its peak of 40,000 in 1934 and, with their ability to pose in their Italian style uniforms taken away by law, the British Union of Fascists were down to a small group of diehards by 1939. Unfortunately Hitler and Mussolini didn’t go away.

George Lansbury’s approach to the threat of war in the thirties contrasts with that of fellow Labour MP and Theosophist Peter Freeman. Making several visits to Europe under the cover of Theosophical Society business he provided many people with the documents required to escape Nazi oppression. He warned several times that war was coming and saw it as the cataclysm from which a better world would come.

Peter Freeman’s stand against Fascism and his support for the use of force to combat it can be seen in this extract from his 1940 Letter to Welsh Theosophists:-

“Failure to make adequate preparation, Lack of effective co-operation and widespread treachery have enabled those who believe in force alone to temporarily get the upper hand on practically the whole of the continent of Europe. Britain now stands alone as the bulwark of justice and freedom amongst the fighting nations of the world. She is, however, secure, not only in the justice of her cause, but in the power of her defences. A united people will, we trust, effectively withstand the onslaught of the final stages of the greatest war of mankind.”

Peter Freeman seems to see the fight against Fascism as Britain’s Dharma or Duty as the events of history work themselves out.

No normal person, let alone Theosophists, wants war and clearly Lansbury’s anti militaristic and anti war stance was very commendable. But what would it ultimately have led to in the thirties? A neutral stance may have given Hitler no reason to attack us but we may have ended up as an enormous Guernsey, masters in our own house only by courtesy of the Fuhrer in a world dominated by a Germany in control of Russian resources allied to the Japanese Empire.

This is a horrific outcome but on the other hand Peter Freeman’s better world, which he expected to emerge from the cataclysm of the Second World War, didn’t exactly happen either. Yes, two of the worst regimes of all time, Nazi Germany and Imperial Japan were wiped out and replaced with stable democracies (East Germany took longer to get there) but the world power structure reorganized itself into well armed major power blocks that eyeballed each other menacingly for fifty years with only the risk of nuclear annihilation preventing another world war. This New World Order didn’t stop war though, these continued with a long list of proxy wars, Viet-man, Korea, Angola etc. The Cold War is now over but there is still plenty of confrontation, oppression, war and atrocity about and from a Theosophical point of view, I would say the cyclic nature of history makes this inevitable.

Progress has been made but the cyclic nature of history means that we advance on the basis of 2 steps forward with one step back. As in the 1930s we still live in a world where many people feel unsafe and as our evolution is unfolding very slowly, this is likely to be the natural order of things for some time.

For more info on Theosophy

If you run a Theosophy Group, please feel

free to use any material on this site

The All Wales Guide to

Getting Started in Theosophy

This is for everybody not just people in Wales

A Free Intro to Theosophy

If you run a Theosophy Group you can use

this as an introductory handout

The Key to Theosophy

The Voice of the Silence

The South of Heaven Guide to

To Theosophy and Dreams

To Theosophy and Angels

Theosophy and Help From

The main criteria for the inclusion of

links on this site is that they are have some

relationship (however tenuous) to Theosophy

and are lightweight, amusing or entertaining.

Topics include Quantum Theory and Socks,

Death & How to Get Through It

Lentil burgers, a thousand press ups before breakfast and

seems to get most of us in the end. We are pleased to

present for your consideration, a definitive work on the

subject by a Student of Katherine Tingley entitled

and The History of Theosophy in Wales

The Spiritual Home of Urban Theosophy

The Earth Base for Evolutionary Theosophy

A Text Book of Theosophy By C

What Theosophy Is  From the Absolute to Man

The Formation of a Solar System  The Evolution of Life

The Constitution of Man  After Death  Reincarnation

The Purpose of Life  The Planetary Chains

The Result of Theosophical Study

An Outstanding Introduction to Theosophy

By a student of Katherine Tingley

Elementary Theosophy  Who is the Man?  Body and Soul

The Seven in Man and Nature

The Meaning of Death

Try these if you are looking for a