Christianity gets the Contract

“Everyone must submit himself to the governing authorities,

for there is no authority except that which God has established.

The authorities that exist have been established by God.”

Was this one of the clinchers that sold Christianity

to Roman Emperor Constantine, putting it on the road

to becoming the major religion of the West ? 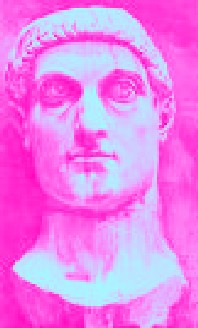 Starting with considerable persecution under Emperor Augustus in the first century C.E., Christianity rose steadily in importance in The Roman Empire until in 312 C.E. under Emperor Constantine it made a sudden jump to become the official religion of the empire.

Christianity’s elevation to official religion was something of a shock result, even for Christians, who at that time were still subject to persecution and restrictions.

The story went like this. By 312 C.E. the position of emperor had deteriorated to a junta of powerful figures who were fighting for supremacy. Against overwhelming numerical odds, Constantine defeated his main rival Maxentius at the Battle at the Milvian Bridge in October 312 C.E.

Constantine later claimed to have had a vision on the way to Rome, during the night before battle. In this dream he supposedly saw the Christian cross with the inscription In hoc signo vinces (By this sign thou shalt conquer). This vision of the cross was shining above the sun. Seeing this as a divine sign, it is said that Constantine had his soldiers paint the symbol on their shields.

Accepted as emperor (Senior Augustus) by the Senate and rivals, Constantine styled himself as “Emperor of a Christian People” and effectively adopted Christianity as his personal religion although he was only baptized on his deathbed.

All persecution of Christians was forbidden and restrictions on them removed. He did not at first control the entire empire until 324 C.E. after a series of hard fought campaigns.

Constantine began by giving Christian institutions certain legal advantages and giving bishops official status within the legal system. But he really got into gear after his victory of 324C.E.

Constantine decreed that firsts the old and then the new testaments of the Christian Bible were the “Word of God”. All the churches got letters telling them this.

Christians moved from being oppressed to being in power in under 20 years.

The miraculous conversion before the battle of is a good story and has credibility within the Chrstian Tradition but did have good business reason for embracing Christianity.

He cannot have failed to notice that the Christian Church had a ready made power structure which commanded considerable obedience and loyalty from members. Declaring himself a Christian Emperor and raising the official and legal status of the hierarchy would increase his influence at all levels of society.

What had to say about obedience to civil authority in Romans 13: 1 – 7 (outlined below) must have been of considerable interest to someone as interested in power as was.

1 Everyone must submit himself to the governing authorities, for there is no authority except that which God has established. The authorities that exist have been established by God.

2 Consequently, he who rebels against the authority is rebelling against what God has instituted, and those who do so will bring judgment on themselves.

4 For he is God's servant to do you good. But if you do wrong, be afraid, for he does not bear the sword for nothing. He is God's servant, an agent of wrath to bring punishment on the wrongdoer.

5 Therefore, it is necessary to submit to the authorities, not only because of possible punishment but also because of conscience.

6 This is also why you pay taxes, for the authorities are God's servants, who give their full time to governing.

7 Give everyone what you owe him: If you owe taxes, pay taxes; if revenue, then revenue; if respect, then respect; if honor, then honor.

This often quoted statement by Jesus when pushed by the Pharisees about his attitude to paying taxes to the Romans, also recommends a similar obedience to authority

Give to Caesar what is Caesar’s, and to God what is God’s

The advantages of hi-jacking a group that has this attitude of obedience to authority as part of its doctrine, making it an official part of state apparatus and declaring it’s teachings as the word of god, offers so much to a ruthless power operator such Constantine that it much have played a crucial role in his decision to adopt Christianity.

It should be noted that there were several interpretations of Christianity in existence between the time of Christ and 312 C.E. and that it was St Paul’s version of Christ’s message that was adopted by The Roman Empire.

The Sun God’s Day becomes the official Day of Worship.

The worship of the Sun God was prevalent throughout the Roman Empire and it is no accident that in 321 C.E. Constantine declared Sunday an official day of rest in all the Roman Empire. This paved the way for the Council of Nicea to make Sunday the official day for the worship of Christ four years later. The choice of the Sun God’s day also had support from astrologers.

Christianity Gets the Story Straight

Once Christianity was on the up, it faced division within itself over doctrine. To sort this out, under the patronage of Emperor Constantine, The Council of Nicea was convened in 325 C.E. and lead to the Nicene Creed. This was one of the most important events in the development of the Christian Church and a number of principles were established which are still found today. The Council condemned paganism in line with Constantine’s Christianization policy.

The division started as a debate between the bishop Alexander and the presbyter (pastor, or priest) Arius. Arius proposed that if the Father

begat the Son, the latter must have had a beginning, that there was a time when he was not, and that his substance was from nothing like the rest of creation. Once the Council was convened, a large number of other issues were up for discussion. Arius was overwhelmingly outvoted.

Constantine played an important role at the Council. Eusebius of Caesarea reports that he played a key part in calming, convincing, and bringing all to agreement on contested points. The account of Eusebius fairly glows in regard to

the Emperor, and he is portrayed as a key figure. It is nowhere suggested, however, that he was permitted to vote with the bishops nor that he used any form of force to obtain an outcome. However Eusabius was very pro-Constantine.

Constantine probably never planned this convention but it is clear that he turned it to his advantage and that it ultimately strengthened the central authority of the church.

From the Theosophical Glossary

I.H.S. This triad of initials stands for the in hoc signo of the alleged vision of Constantine, of which, save Eusebius, its author, no one ever knew. I.H.S. is interpreted Jesus Hominum Salvator, and In hoc signo. It is, however, well known that the Greek IHS was one of the most ancient names of Bacchus. As Jesus was never identical with Jehovah, but with his own “Father” (as all of us are), and had come rather to destroy the worship of Jehovah than to enforce it, as the Rosicrucians well maintained, the scheme of Eusebius is very transparent. In hoc signo Victor ens, or the Labarum  T (the tau and the resh) is a very old signum, placed on the foreheads of those who were just initiated. Kenealy translates it as meaning “he who is initiated into the Naronic Secret, or the 600, shall be Victor” but it is simply “through this sign hast thou conquered”; i.e., through the light of Initiation—Lux.

Labarum (Lat.). The standard borne before the old Roman Emperors, having an eagle upon it as an emblem of sovereignty. It was a long lance with a cross staff at right angles. Constantine replaced the eagle by the christian monogram with the motto en touty nika which was later interpreted into In hoc signo vinces. As to the monogram, it was a combination of the letter X, Chi, and P, Rho, the initial syllable of Christos. But the Labarum had been an emblem of Etruria ages before Constantine and the Christian era. It was the sign also of Osiris and of Horus who is often represented with the long Latin cross, while the Greek pectoral cross is purely Egyptian. In his “Decline and Fall” Gibbon has exposed the Constantine imposture. The emperor, if he ever had a vision at all, must have seen the Olympian Jupiter, in whose faith he died.

Please don’t go looking for anyone else.